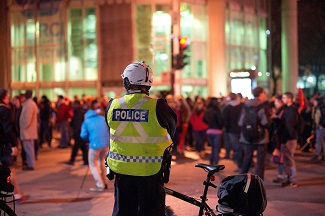 There has been much civil unrest across the country following the police-involved deaths of Michael Brown and Eric Garner. People have been protesting, rioting in the streets, and destroying property for several weeks, which has inspired many business owners to install security window film.

Film installers in St. Louis have done more work to protect storefronts in the past three months than they have in five years, they say. And in Oakland, where rioting has become practically commonplace, installers have been working around the clock.

Windows and other glass installments are a favorite among vandals and looters. They’re a weak point in a building offering maximum destruction and fast access. In fact, reports suggest that 77% of burglaries and robberies involving forced entry occur via a broken window.

This is where security window film can help. This type of film is slightly thicker and much tougher than those designed for other purposes. By keeping broken glass in place, security film will delay, deny and dissuade criminals from entering your property. And if they’re persistent, the time it would take them to get through will easily allow for law enforcement to respond.

Having security film installed makes your property much more difficult to break into, making it an effective crime prevention measure. While there are other methods you can employ to protect your business (or your home) there are a few specific advantages to applying window film:

In comparison with other security measures, like roll down shutters and cutting edge surveillance, security film is a bargain. We offer competitive pricing and we have the most experienced and efficient installers in the area. You simply can’t beat the value you can get from Pacific Window Tinting products and services, especially when you consider what you’ll save by improving security.

One of the downsides to installing gates or shutters is the appearance. They certainly aren’t inviting, and can give customers the feeling of being in an unsafe area. The beauty of window film is that it’s totally invisible. You can enjoy high-level security without looking like a fortress. And if you like, you can choose a tinted security film that will keep thieves from seeing anything they might want in the first place.

The films we offer are used to protect high-level government buildings, and if it works for them it will work for you too. Our preferred product, called Armorcoat, is put through rigorous testing and has proven to withstand heavy blows by all kinds of tools and weapons– even bomb blasts. Armorcoat has received many of its testing agencies’ highest ratings.

In addition, when considering the type of damage protesters can cause one must also address more common kinds of vandalism, like graffiti. You can protect your business from spray paint, scratches, and even acid etching with a film called Graffiti Gard. While Armorcoat is applied the inside of the glass, Graffiti Gard is applied to the outside, allowing us to simply remove it — and the “street art” — when your windows get hit.

Protect your property from looting and vandalism. Contact Pacific Window Tinting today about Armorcoat and Graffiti Gard.  Call us at 503-736-9000.