How Much Heat Is Lost Through Windows?

Ever thought about how much heat is lost through windows? According to the U.S. Department of Energy, about 30% of a home's heating energy goes right out the window — literally. That’s cause for concern everywhere — but especially here in the Pacific Northwest, where “winter” lasts way longer than three months. Thus, it makes sense to pay attention to energy loss. Specifically, heat loss through windows. Windows and Heat Many of us think about how much heat windows allow into our work and living spaces. When it’s sunny and hot outside, it’s nice to have sunlight indoors — but not so much the heat. That’s what makes window tinting such a superb solution to reduce heat in cases like this. Tinting permits light but keeps summer’s heat outside where it belongs. Conversely, when it’s sunny and cold outside (admittedly a rarity in these parts), it’s nice to still have that sunlight while retaining the warmth that it brings along for the ride. Here again window tinting does the trick — allowing the sun’s warming rays to penetrate the space just enough to not overwhelm the room. But there are other factors at play when it comes to determining how much heat is lost through windows. If there are cracks or seams — either in the windows themselves or in the frame — then you are probably losing and wasting a lot of heat. Let’s take a look at how best to prevent this heat loss. Preventing heat loss As we’ve written about before, windows END_OF_DOCUMENT_TOKEN_TO_BE_REPLACED Continue Reading

Many architects are learning that tinted windows are one of the best things that could have happened to the world of architecture. In the past, architects had to make a choice between putting windows in places where they look attractive and letting in natural light, or making sure that the sun does not make the building uncomfortably hot. However, with better window tinting available for commercial and residential buildings, that is no longer an issue. Architects can now focus on placing windows where they look best and where they will let in the most natural light rather than worrying about placing windows in locations that will not bring in too much heat. A World Before Tinted Windows Carefully Placed Windows In the past, an architect needed to consider where to put windows based on where the sun would be less likely to overheat the house. For instance, on the West coast, such as in Oregon, Washington, and California, windows on certain sides of the house will receive sun at different times of the day. Windows on the east side of the house will receive sunlight at a low angle in the morning.  On the west side of the house, windows can cause cooling problems as the sun will hit those windows as it is setting. Large windows on the south side of the house can also cause cooling issues as they will receive the blazing mid-day sun. Those windows placed on the north side of the house will not often receive a lot of direct sunlight. That is three sides of the house were END_OF_DOCUMENT_TOKEN_TO_BE_REPLACED Continue Reading 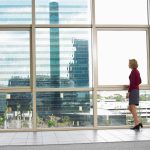 Windows are often what customers first see when they look at your establishment. Big, bright windows create an open and welcoming image. But those same windows can create problems. Glare, heat, UV damage and vulnerability to thieves and vandals are some of the downsides of large windows. Commercial window tinting can help. Window film helps you save money by reducing hot spots and glare. It can also slow burglars and thwart vandals. Energy-Saving Benefits Businesses often consider installing window tinting to help save energy. Window film reduces the heat that enters through windows keeping your interior cooler, reducing the need for air conditioning. You'll save on energy costs while reducing wear on your HVAC system. Employees will feel better when hot spots from southern-facing windows are eliminated. Savings can be substantial and we can help you calculate the potential financial gains. Learn more by requesting an energy assessment. How Much UV Protection Do You Need? Even in cloudy Portland, the sun's rays can fade your furnishings. Sunlight damages floors, furniture, merchandise and equipment. Window film helps preserve the value of your property. More importantly, film can help protects people's’ health. You don't need to be sunbathing to experience the damaging effects of too much sun. Window film is available in various strengths of UV protection.  Learn more about window film's power to protect against the sun. Does Your Business Require Privacy? If END_OF_DOCUMENT_TOKEN_TO_BE_REPLACED Continue Reading 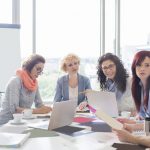 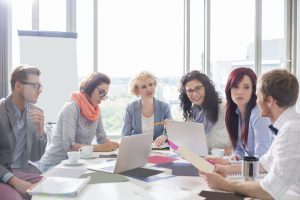 An office environment that is ecologically friendly is good for employee morale and productivity, as well as for the environment. It can also save your company money. Portland, Oregon is an eco-friendly city with many ways to stay green. Here is a look at three eco-friendly updates that will make a positive impact at your Oregon office: Add Commercial Window Tinting Solar window film can keep workers more comfortable and reduce your building's energy consumption. The film resists more than 75 percent of the sun’s rays and controls how much solar heat enters the building. The result is an even temperature. Building managers can maintain comfort with less reliance on HVAC equipment. You'll save on utility bills and also reduce the workload on equipment. Pacific Window Tinting will conduct a free building energy analysis of your Portland building. We use software approved by the U.S. Department of Energy. The analysis takes into consideration building exposure and the amount and type of glass. It can project energy savings after the installation of window film. Use Smart Lighting Smart lighting systems adjust the lights to suit the available amount of daylight and occupancy levels. It eliminates situations like offices and conference rooms that are fully lit even though no one is using them. Most offices have older controls that turn lights on and off based on pre-selected timetables. These systems are inefficient compared to the latest technologies. Modern smart systems END_OF_DOCUMENT_TOKEN_TO_BE_REPLACED Continue Reading

Portland has its own take on the Pacific Northwest winter: ubiquitous Portland mist and dreary overcast days interspersed with occasional crystalline blue sky. What part can window film play in this type of winter climate? Surprisingly, solar window film can make a big difference in comfort during the winter in this area. According to Darrell Smith, head of the International Window Film Association, “In areas where traditionally they’re not big sunshine areas, you still are seeing increases in the use of these products.” Here are five benefits, even in winter, from installing window film that Portland residents have discovered. Fade Control Though the sun doesn’t come out often, its UV rays can fade drapes, upholstery, fabrics, carpets, artwork, hardwood floors and other furnishings. Owners of homes and commercial properties, like offices and hotels, spend big bucks replacing damaged fittings. Window film blocks most UV rays, virtually eliminating the danger of fading. UV Protection Mention the danger of ultraviolet rays from the sun during a typical Portland winter and you’ll get a big laugh. But UV rays are sneaky. Sitting in an office or at home in a spot that gets the sunlight that does appear can increase the risk of skin damage. Window film can eliminate about 99 percent of all the UV rays. This means you can enjoy natural sunlight without exposure to harmful rays. Privacy Window film is available in a wide variety of tints and reflective finishes. END_OF_DOCUMENT_TOKEN_TO_BE_REPLACED Continue Reading